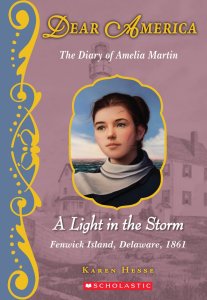 Taking place during the onset of the Civl War in Delaware, a border state where both Union and Confederate sympathizers dwell among one another, this story follows sixteen-year-old Amelia (“Wickie”) Martin, assistant to her father, an Assistant Light Keeper. Amelia is content with her life and her many chores and duties among family, school, and the lighthouse, but the strong cultural and political differences between her abolitionist father and Southern belle mother begin to drive a devastating, irreconcilable rift between them, casting her father into darkness and her mother to severe illness and misery, eventually leading to their divorce.

On top of being depressing, virtually two thirds is about weather (literally), which became a bit tedious (unless one is interested in the temperature, amount of precipitation, and direction of the wind on Fenwick Island in 1861, information which this book does provide quite liberally). Amelia kindles a potential romance with a young soldier; however, their relationship ends up  being unfruitful.

The author attempts to draw parallels between the two plot lines of light keeping and the Civil War, but they never truly intersect. While we read some of Amelia’s fears and discomfort regarding the civil disagreements and pending war, the war never affects her light-keeping duties and ambitions, which is what her personal story is really centered around. I would recommend this book to lighthouse enthusiasts.