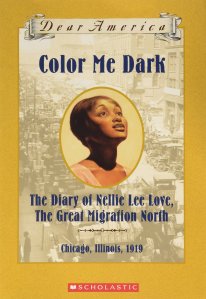 Nellie Lee Love lives with her family at their undertaking business in the Corners of Tennessee. The Loves are a close-knit family, and Nellie is especially close with her sister, who is the same age as her most of the year, Erma Jean. One interesting character aspect in this book is that Erma Jean loves words and poetry, and Nellie prefers numbers, often fittingly filling her diary with number games. All seems to be going well until the girls’ Uncle Pace dies a brutal, mysterious death. Erma Jean stops speaking, and their father decides to relocate the girls, their mother, and his undertaking business to Chicago, where it was believed African Americans would be safer from the racist crimes and killings, and from groups like the KKK, down South. However, the family arrives to Chicago only to find that there is just as much racism– murders, rioting– and a new form of classism between blacks, up North.

Many of twelve-year-old Nellie’s entries were about her parents’ activism, politics, historical crimes and riots that occurred, and references to many famous African American activists, writers, and historical figures and their works. The historical note in the back was the longest and most extensive I’ve seen yet, complete with detailed bios of the many notable African American figures throughout the nineteenth and twentieth centuries mentioned in the dairy. I found Nellie and her family to be lovable characters.

C.K. Brooke is a multi-award-winning author of over 20 novels and novellas. She is best known for her Mythic Maidens Series, Jordinia Saga, and American Pirate Romances. Her books have been published by 48fourteen and Limitless, as well as indie published, garnering accolades from the 2020 Best Indie Book Award in YA Fiction to the Indie B.R.A.G. Medallion Award. She’s been a guest speaker and panelist for the Detroit Romance Writers, Romance Writers of America, and Barnes & Noble Teen Book Fest. In 2020, she founded Called by the Heart Publications, releasing numerous e-books, paperbacks, and audio books annually. Her latest historical romance, THE POET BRIDE, is available for free on the Readict app. She lives in Michigan with her family. Follow her on Amazon for new release updates. View all posts by C.K. Brooke