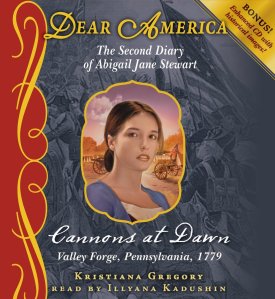 Cannons at Dawn is the second diary of The Winter of the Red Snow‘s Abigail Stewart, and the first sequel in the “Dear America” series. The story continues not long after Abigail’s first diary ends, still in the middle of the Revolutionary War. As we learn in the opening pages, Abigail’s father, the cobbler, has joined the Patriot army and leaves for war. However, almost immediately after his parting, the Stewarts’ house burns down, causing the family, now with no place to go, to march behind the soldiers and camp near them. It is quite a new and nomadic lifestyle for these women and children, never knowing where they will be ordered to next, their lives constantly at risk, having to be prepared to pack and leave at any moment’s notice. The winter blizzards as well as the summer’s heat are cruel and fatal for the soldiers and their families, and the severe absence of food, wages, and clothing caused not only much illness but mutiny among the Patriots.

While Abigail’s first diary takes place on the homestead in Valley Forge, witnessing to– but not necessarily participating in– the soldiers’ circumstances, the sequel is very much an ‘on-the-road’ story, and this time Abigail is suffering the conditions of the soldiers first-hand. (*SPOILER WARNING*) As this book takes her from ages twelve to fifteen, it is also a more mature story, indeed following Abigail even into her own marriage and motherhood (although no marital relations are even hinted at, other than her pregnancy itself).

An enjoyable story, very different from the first, also with likable new characters, including the runaway slaves Lulu and Mazie, and Thomas, the drummer boy, as well as Abby’s love interest, Willie, one of the young soldiers. The geographical history is also commendable; the author cross-checked the lunar calendar and gave accurate dates for the blizzards, full moons, and even New England’s Day of Darkness mentioned in the book (on top of the historical events pertaining to the War themselves). The Historical Note at the end was also one of the more unique in the series as a whole, taking many tangents and recounting some side-stories rather than the usual, plain historical names and dates (most likely due to the author having already written an historical note on the Revolutionary War for the previous book).

C.K. Brooke is a multi-award-winning author of over 20 novels and novellas. She is best known for her Mythic Maidens Series, Jordinia Saga, and American Pirate Romances. Her books have been published by 48fourteen and Limitless, as well as indie published, garnering accolades from the 2020 Best Indie Book Award in YA Fiction to the Indie B.R.A.G. Medallion Award. She’s been a guest speaker and panelist for the Detroit Romance Writers, Romance Writers of America, and Barnes & Noble Teen Book Fest. In 2020, she founded Called by the Heart Publications, releasing numerous e-books, paperbacks, and audio books annually. Her latest historical romance, THE POET BRIDE, is available for free on the Readict app. She lives in Michigan with her family. Follow her on Amazon for new release updates. View all posts by C.K. Brooke